Dr Strange In The Multiverse Of Madness 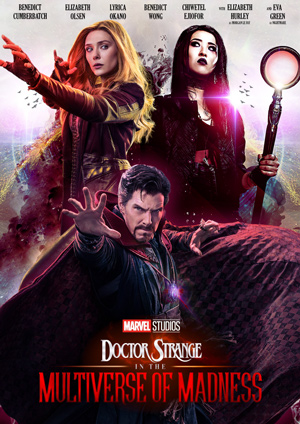 Link to the wallpaper here

I enjoy Marvel movies. That's what made me decide to go watch Dr. Strange in the multiverse of madness. I am not one bit superstitious and even if it was Friday the 13th, I just wanted a fun movie to enjoy with a friend. Once the story was underway, I couldn't help but notice the symbolism and made mental notes to write about them later.

Once more, this Marvel Studios film is about the neurosurgeon who became a Master of the Mystic Arts. Unlike any other Dr. Strange representation, this tale is made of action and also black magic, sorcery, witchcraft, and satanic rituals. This thrilling storyline introduces a book of "good magic", the Book of Vishanti versus its exact opposite, the Book of the Damned, or Darkhold. I had read about the different beliefs and rites of white and black magic in Kabbalah, and reviewed the book a few weeks earlier (review of Kabbalah here). In this plot, Dr. Strange is jumping from one universe to another with America Chavez, what a coincidence on her name, and the spectator wonders whether he will use the powers of the Darkhold with some initially good intention or not. In the end, a latent question is repeated: "are you happy"? Dr. Strange is different in each universe, yet he tells Christine, the woman he loves, "I love you in every universe". Will he be more clairvoyant with his acquired knowledge?

This motion picture is entertaining. In the beginning, a one-eyed monster with runes is all over the screen. Demonic entities will, later on, make appearances. The Scarlet Witch observes a satanic process to reach her goal, in an apocalyptic-like setting. I had also recognized the LGBTQ+ flag on America's clothes but didn't make much of it until she revealed that she lost both her moms when she accidentally opened a portal to a different universe from the one she was living in. A few scenes later, the Illuminati, gathered to judge Dr. Strange, is composed of elite heroes: Karl Mordo, Professor X, Captain Carter, Captain Marvel, Black Bolt, and Reed Richards. It becomes clear as they expose their views that they were in fact protecting an Orwellian-like authoritarian world. What will happen next? Can they stop the Scarlet Witch? Watch this flick as an amusement, rather than any kind of true message, even if some passages are not that shallow...