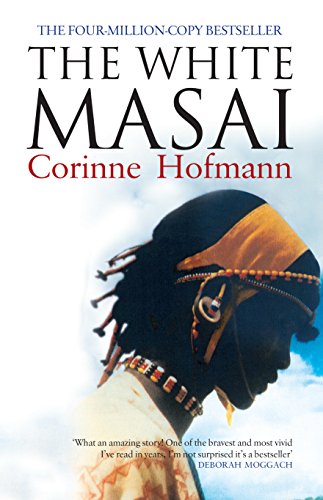 November 2013. I'm lying in a hospital bed. Awake. The pain is excruciating but I don't want to take more painkillers. It's more than enough, with all the drugs they have pumped into my system before and after the surgeries. I can't stand to watch TV. My tablet's battery is almost out, since I had been reading and playing on it for 6 or 7 hours straight. The nurse had already checked up on me twice and it took all my will to smile and say I am not feeling any pain and avoid her increasing the dose of painkillers. But how to pass the time?

I took the first book I could reach on the night stand. It was "The White Masai". I didn't feel like a romantic story. I was feeling down, lonely and cranky. But the other books that my sister had brought for me were a little farther of my reach and I didn't feel I had the energy to get up and get them to make up my mind. So, why not? I thought maybe the story will put me to sleep. How wrong was I...

I stared at the book cover for a good 5 minutes. Did I really want to read this? The story of a Swiss woman, on a holiday with her boyfriend in Kenya, who "falls in love" with a Masai warrior at first sight and leaves everything to be united with him. The whole concept is kinda weird to me. How can a mature woman who had her own business dilapidate her assets to move to Kenya, just to be closer to the man she wants?! Corinne is determined to make the relationship work. Sometimes at her own expense. There is a particular bothering scene where she is very sick and at the hospital and she eats the meat her husband brings her only to please him, even though she knew she wasn't supposed to eat it. Was that an indirect suicide attempt? I kept reading, hoping Corinne will come back to her senses at some point... I read on. And on. Until I had finished the book.

This story is an easy read. I finished the book within a couple of hours. Sometimes, the naïve attitude of Corinne can get on one's nerve. She tries too hard to make it believable that she is in love with the man she left everything for. She indeed left Switzerland to marry and live with him in Kenya. Only thing, she was forcing herself on an alien culture she knew nothing about. And the mishaps she had to stand through are only brought up upon herself by her foolishness. Now I have to admit that the move to follow her heart rather than her rationale is a bold one. And this is also questionable. It feels more like following her libido's dictate. Anyway, it would have been smarter to listen to the voice of reason and try to analyze the situation before throwing herself head first into an environment she had no idea about. Even if at some point I felt some kind of pity for her, I kept wondering did she really expect it to work out?! Then again, who am I to judge.

To sum it up, the book is a romanticized tale of an uncommon adventure that gives an insight on the Masai culture. It did not shake up my theories on love and relationships though. But that's for another post ;)