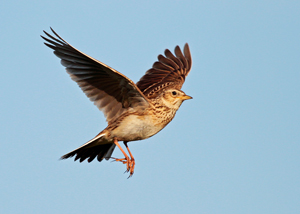 Picture of skylark can be found here

With the change in weather, migratory birds fly from Europe and Turkey towards the south and more clement skies. This means they will pass over Lebanon, making our hunters very happy. Many are unaware of their behavior and its impact on the environment or the safety measures to abide by. As a side note, hunting birds in spring is genocide because of the offspring dying when the shot mother isn't there to feed them...

In 1995, hunting wild animals and birds was officially banned in Lebanon. This ban lasted until the year 2016. Unfortunately, the lack of sanctions led to more poaching, especially of migratory birds. Some types changed their routes, and some now avoid the Lebanese skies. And it is understandable when some people shoot just anything that moves!

The code of conduct of any hunter, and this applies to any hunter on Earth, is quite simple:

2. Respect what you are hunting: learn and know the habitat of your prey, avoid overestimating your shooting skills, and kill to eat and not just for the fun of it. Keep in mind that not anything that flies and/or moves i.e. not any wild animal is meant to be hunted: hunters should keep the ecosystems in mind in order not to extinct a specific species, especially if they shoot for fun and not for food

3. Practice gun/riffle safety at all times: it can get dangerous and even lethal to you and/or your hunting mates when you don't pay attention to safety

4. Respect others by refraining from littering people's properties and abiding by laws and regulations in place: remember to collect the empty cartridge casings because plastics are harmful and they won't disintegrate in the soil; the cardboard boxes of your cartridges are mostly made of materials that can be recycled and reused. Keeping the lands clean is not merely a soothing sight to the eye. The empty casings can also be recycled, up-cycled, and treated for usage, and this can benefit some people economically as well as the environment

5. Take care of the wilderness by being responsible for the environment and shunning over hunting.