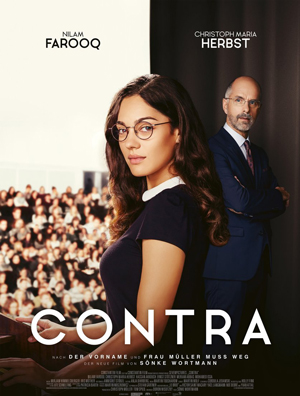 "Contra" is a German movie by Sönke Wortmann that was supposed to be released in 2020 but got postponed until last year. It is a soft comedy taking place in Frankfurt and tackles the concept of migration in Germany. Naima Hamid is a young student of Moroccan descent and arrives late to the class of Pr. Richard Pohl, known for his antagonistic ideas. The professor has a racist outburst at the young lady, which didn't surprise me much: after all, Germans can be anal about punctuality. It was more the clichés about immigrants and their societal behavior that was quite excessive. What happens next is that the video of that flare-up gets viral and the job of the professor is endangered. He is "advised" to coach Naima for a debating competition and I will leave you to watch the rest. The film shows us the power of words and how the goal of a discussion lies beyond finding out the truth but rather more in using your arguments to skillfully score a win, regardless if you are pro or contra (against) a certain cause. Entertaining and sometimes funny, this is a light watch to pass the time.