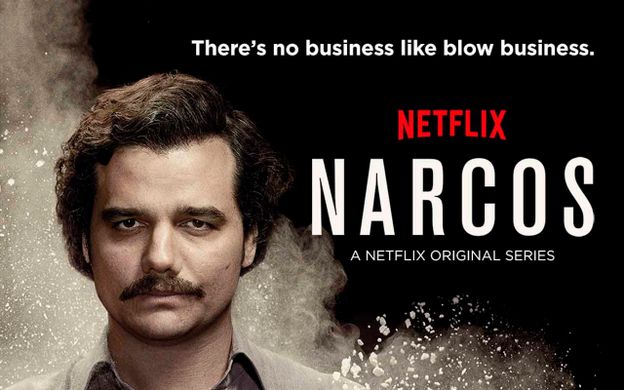 A friend had suggested to watch this series. I must say that after less than 2 episodes of season 1, I was already hooked. I subscribed to Netflix and on my sleepless nights I would watch up to 3 episodes in a row...

Each season is composed of 10 episodes. The Tsar of Cocaine, Pablo Emilio Escobar Gaviria of his real name, born in Rionegro, Colombia in 1944 to a farmer and a schoolteacher, started his criminal activities at an early age. Tales are disputed in this regard. What is certain is that by his mid-twenties, there are still no drug cartels and Pablo is already flying out cocaine loaded planes between Colombia and the USA.

The first 2 seasons narrate the story of the infamous drug lord, who made his billions from the production and distribution of cocaine, through the lens of Steve Murphy, an American Drug Enforcement Administration (DEA) agent working in Colombia. Early on his trade, Pablo resorts to dealing with the authorities either by ways of bribery or by murdering (to obviously silence) his opponents. Soon, he could afford to buy about 20 km2 in the land of Antioquia, where he had the Hacienda Nápoles built. This luxurious property included a complete zoo, a sculpture park and a private airport among other facilities. After Pablo's death in 1993, many of the buildings were either demolished or re-purposed.

Pablo Escobar was especially loved among the poor people. He was a sports' fan and built houses and football fields in several Colombian areas. He cultivated his "Robin Hood" image among the less favored and often these people would help him escape the police. He eventually is betrayed by members of his own cartel and Pablo has to go on the run. He hides with a bodyguard in a safe house and is tracked down by the military and the DEA when trying to contact his family via radio. Shot twice, he might have survived his injuries when Trujillo, a Colombian policeman, executes him shouting "Viva Colombia". Pablo's wife resorts to the Cartel asking for their help to leave the country with his son and daughter.

The third season tackles the rise and fall of the Cali Cartel after Pablo Escobar's death. Business is booming with the emergence of new markets and everyone is shocked when the current leader of the Cali Cartel, Gilberto Orejuela, announces that the Cartel will leave the cocaine business within 6 months to focus in its legal ones. The decision is met with mixed reactions and ensues with the decimation of several prominent members and the fall of the Cali Cartel.

The fourth planned season was transformed in a new series named Narcos: Mexico. I watched one episode and got bored and ended up switching to watch something else.

The first season portrayed Pablo as a very humane individual and all throughout his life, and despite his various affairs, he is shown as a caring father and a husband who tends to his wife's needs. It is with the second season, when anyone not agreeing with him on a matter or the other is taken care of by bribery and mostly by termination/murder that his character is vilified and depicted as a cold-blooded and ruthless businessman. In the third season, a closer look is given to the other members of the Cali Cartel, yet none measures up in strategy nor decision-making like Pablo. Many books and films have recounted and romanticized the life of Pablo Escobar. That being said, if you want to improve your Spanish, watch the series with English subtitles. You will get a hang of the Latin American Spanish slang.

Link to the displayed pic.