Mutual Aid, A Factor Of Evolution 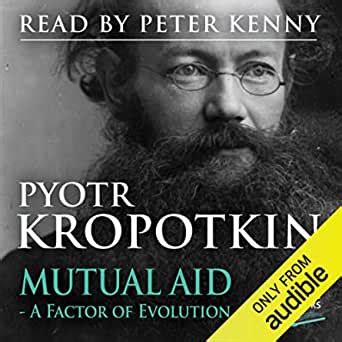 The author was born into an aristocratic family in 1842 but wished to drop his princely title at the age of 12. He later joined the Corps of Pages, a military academy in Imperial Russia, which prepared sons of nobility for military service. Because Kropotkin wanted to be "someone useful", he joined the Cossack regiment in Siberia. During his military career, he was introduced to anarchist ideas and he was successful in scientific expeditions in which he took part. It is subsequently, after resigning from the army and returning to St. Petersburg to study mathematics, that he decided he preferred diffusing existing knowledge to people instead keep working on new discoveries. His activism and efforts to disseminate revolutionary propaganda among commoners led to his arrest and imprisonment. He escaped 2 years later and would spend the next 4 decades in exile between England, Switzerland, and France. It is during these years that he would write his most known work, "Mutual Aid", which was published in 1902.

This book is a collection of essays that rebuttal to Social Darwinism, which was fashionable in the late years of the 19th century. The basic claim of "Mutual Aid" is that collective support in the animal kingdom is an essential factor in the ability of species to survive. While Darwinians emphasized the concept of competition and "selection", which they used to justify extermination based on race and other prejudicial arguments, Kropotkin focused his attention on elements noted during his observations of nature. He simply challenges Thomas Hobbes' on his views to assert that the cooperation of primitive people allowed humans to live on and develop. The book exposes mutual aid among animals, savages, the Barbarians before addressing the concept in Medieval cities and current times. Those times are obviously more than a century old now. The logic still stands though: packs honor a code of conduct and this preserves the continuity of the breed. And it is to be noted that some friendly competition can be indeed mutually beneficial.

The author doesn't deny that life is made of struggles and that societies can be made of nasty, evil people. He understood very well the power struggle of the classes. He just saw a different path to overcome that and still evolve and progress. Being a social vulture doesn't necessarily leave out the best to perpetuate the human legacy. Maybe humanity needed the fittest to win it all in a certain context. However, it seems historically recorded that humans are inclined to work together and that social structures as well as capitalism with their insistence on constantly calling for individual competition brought out the worst our communities had to show. This is a very interesting take. And I would love to hear from you when you read it!