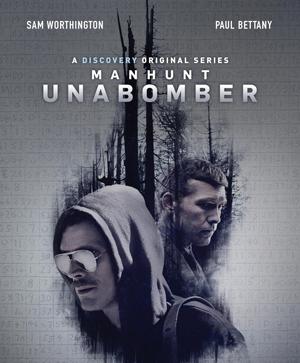 Manhunt is a TV miniseries. The first season, released in 2017, depicts the FBI hunting down the Unabomber who turned out to be a mathematics professor, transformed into a serial bomber, and hence a terrorist. This season encompasses 8 episodes. It was recommended by a friend and I took my time watching it. It was interesting to understand the evolving methods of crime investigation. The first few episodes focus on Jim Fitzgerald, the profiler who was responsible for catching Ted Kaczynski. His obsession with the case takes its toll on his personal life and pushes him to persevere despite the agency's bureaucracy. And this apparently pushed the Bureau to adopt what was since then known as Forensic linguistics. It isn't until the later episodes that the viewer is more acquainted with Ted and his persona and can discern the reasons behind his life shift and the proclamations he wrote. One cannot but empathize with Ted who seemed to be more interested in getting America to listen to his ideas rather than terrorize the population. His beliefs about institutions ruling over people through new technologies probably stem from his life experiences, first at Harvard, where he enrolled to study mathematics at age 16. It is at Harvard that this sensitive young teenager was emotionally abused by an MK-Ultra experiment. It is now known that the CIA operated illegal torture techniques through the MK-Ultra program, such as electroshocks, sensory deprivation, and other kinds of abuse to cause extreme trauma and dissociation. Is it fair then to sentence that man for the crimes he committed? What about the people who created that monster in him? Because killing others, physically or mentally, no matter what the reason is, never can be applauded. This part of the series remains a hot topic with all that the world is witnessing in recent years. It is edifying how much private info is placed in the hands of establishments, corporate or governmental, who at times cannot be trusted. Can they?