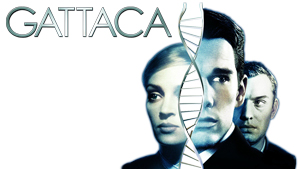 25 years ago, this film was launched and depicted a dystopian future. The letters G, A, T, and C stand for guanine, adenine, thymine, and cytosine, respectively. These are the letters that make up the four nucleobases of human DNA. A select few parents are enticed to choose the genetic composition of their future child to perpetuate their best hereditary traits. Vincent Freeman, conceived outside of this program, unlike his brother, Anton Junior, has an estimated lifespan of about 30 years and a plethora of potential disorders. And even if society is not supposed to discriminate based on one's genes, gene profiling is common in Gattaca to decide who is valid (genetically enhanced) or in-valid (not treated). Furthermore, society can dictate one's identity and maintain control by segregating the people into different classes. And Vincent's prejudice is, that even if he has always wanted to work at Gattaca's aerospace corporation, he is deemed in-valid, i.e. not good enough, for the job. What will he do? Can he find his place in Gattaca and a way to make his dream come true?

Considering the technology illustrated in Gattaca and its purpose, and what we are currently experiencing, one can't but acknowledge the progress achieved by science in the field of transhumanism and eugenics within a few decades. We can currently have our DNA sequenced, and analyzed to find out what type of food one is allergic to and what inherited sleep patterns one was graced with. The warning bell comes in when the technology, claimed to have been originally developed to "serve" us, humans, in eliminating crippling diseases, for instance, turns out to be used to enslave and keep us in check. In the report published by Dr. Mercola yesterday, May 10, the underlying push of the World Health Organization (WHO) to monopolize Healthcare worldwide, impose global governance and restrict rights and freedoms under the Global Pandemic Treaty as soon as 2024 is blatant. This opens the door to gene mandates and therapies, enforced on people in exchange for their right to move "freely", whether by train, car, or plane. Link to the report here. Welcome to communism 2.0, where certain genes are advocated to be preferable to have and human individuality is considered mediocre, thus paving the way to be governed by gatekeepers who decide and think on our behalf!!

By the end of the movie, Vincent states: "For someone who was never meant for this world, I must confess, I'm suddenly having a hard time leaving it. Of course, they say every atom in our bodies was once a part of a star. Maybe I'm not leaving; maybe I'm going home." This is another food for thought that can be explored on the spiritual level as well. I enjoyed watching Gattaca and was startled that this Sony Picture of a quarter of a century ago is so close to the reality we are now undergoing. Ethan Hawke, Uma Thurman, and Jude Law are a powerful acting trio and flow all through the electric tones of the scenes. I also liked the soundtrack. I recommend watching this oldie while keeping in mind that our human "flaws" are what differentiate us from each other as well as robots/machines and our individuality renders us each a unique specimen, entitled to be happy and fulfilled. It is necessary to make science and technologies help us, not to allow them to oppress us. The mRNA technology that is used to generate the Covid injections is a gene therapy using CRISPR/Cas9 to modify the genomes of living beings. The real danger lies beyond the gene editing in the laws that are being created for population command and the protection of unintended (or are they intended?) consequences that are triggered. Research and read about the technology of gene drives to understand how a specific suite of genes is engineered to propagate to the not vaccinated individuals. The "shedding" from someone who was administered the mRNA vaccine is real and not science fiction. Is this the end of humanity as we know it?

Amazingly analysed and written…
Apparently yes , some have a hidden agenda for humanity..
I always ask myslef when i am sad and frustrated by that, what can i do? What can We do to escape this fatalistic fate?

I believe we are where we are

Thank you for taking the time to read and also to comment. I believe we are where we are each supposed to be. We need to keep doing our best and… Carpe Diem. Because que sera, sera 😁