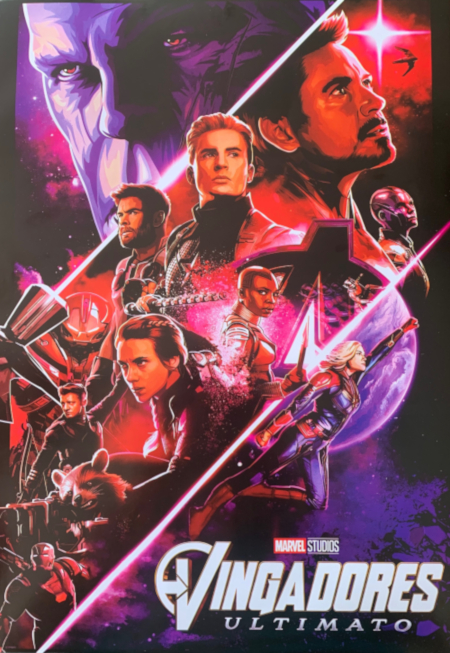 l had promised my best friend's 15-year old daughter to watch Avengers: Endgame with her as soon as it was released. I had been in Brazil for about 2 weeks already and was enjoying myself between touring around the country and spending quality time with whom I consider like family. Having watched the movie in Santos explains my poster being in Portuguese. More about my trip here. So, on Tuesday April 30 evening, and since we could secure the seats online, Sophie, her friend Sofia and I headed to a theater to enjoy the last sequel of the Marvel Studios production. We were excited as were most of the spectators.

After watching Avengers: Infinity War, I had gone out of the theater somewhat bothered by the ending. Thanos who had secured the 6 Infinity Stones had disintegrated half of life across the universe. Hence, several members of the Avengers had equally vanished into thin air. While Thanos handled as per his twisted vision of preserving a balanced equilibrium by decimating lives randomly, the immediate question that arose was who decided on who had to vanish and who got to remain alive?.. In the Endgame, we first find out that Stark and Nebula are rescued from deep space. When they join the remaining Avengers on earth, they locate Thanos and plan on retaking the Stones to reverse the damage that had resulted from Thanos' actions. Only they find out that Thanos had already destroyed the Stones to prevent such reversal. Thor is so infuriated that he beheads Thanos who is weakened from destroying the Stones.

5 years go by and coincidence, Scott Lang escapes the quantum realm. He heads to the Avengers' quarters and exposes what he experienced. The idea of time travel to reverse the damage caused by Thanos is born. Locating and convincing the former Avengers members of the action plan is not an easy task but eventually the different teams head to the past and collect the stones to bring them to the future. This does not always go smoothly and a present huge battle ensues. Thanos recuperates the Stones after overpowering Thor, Rogers and Danvers only to be stopped by Stark who steals the Stones from him and disintegrates Thanos and his armies. Unfortunately, Stark dies as a result and the Stones are returned to their original place in time after his funeral.

The public at the theater was mostly young and engaged with the adventures experienced by the different characters. There were collective reactions at certain moments and a shared display of emotions. I had read several opinions about the ending of the movie being disappointing and tried to remain as non-expecting as possible regarding the unfolding of the events. I enjoyed the battle scenes a lot, especially the one where the restored armies appear to the rescue in fighting Thanos and his armies. The special effects were simply amazing!

The unfolding of events could have certainly taken a different direction. We all love our heroes and want them to live forever. True, it is a fictional story and Stark could have been left to live after his intervention to stop Thanos from repeating what he had previously done and taking it to another level by wiping out all Avengers. Yet, his action is even more poignant because his life is sacrificed in the name of the greater good of not only humanity but also life in the universe. The Ironman had therewith secured a safer future for his daughter and all other living beings. Can it get more heroic than that? After all, this can be compared to any "regular" parent doing their best to provide their offspring with the best they can in order for them to prepare the younger generations for the unknown in the tomorrow. That is how life goes on and evolves instead of repeating itself by stagnation, which leads into extinction. What about balance? And the too many mouths to feed and the resources becoming scarce for the existing and upcoming populations? Well, how about we let Nature regulate its own balance and order, like it has done for the past several millenia. And we are here to doubt a self regulatory system that had so far been able to survive because someone thought they were smarter and could decide for everyone else?.. Naaah. They ain't how it works dears. This has been experienced throughout human history at several moments and did not generate any good for humanity. Shouldn't we have learned our lesson yet?...