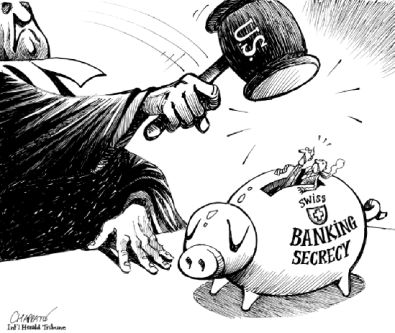 Let's go back in history for a few centuries. The practice of confidentiality was initiated by Italian merchants in the 17th century and it wasn't till 1934 that Switzerland codified its Banking Act making it a crime to divulge client information to a third party without prior consent. The stability of the Swiss currency and the neutrality of its politics influenced the large capital inflows during WWII and after: Swiss banks protected German Jewish assets as well as Nazi funds/assets. And the country catered to French, Italian and German clients in this different cities. Several decades after the end of WWII, Switzerland is facing a lot of pressure to loosen up its bank secrecy as other regulators would pay closer looks to tax evasion and tax fraud. More on Swiss banking here. And for more specific info on how the USA tackled tax evasion and fraud with Swiss Bank Frey, read this.

Where does Lebanon stand in regards to bank secrecy?

Back in the mid 1950s, Lebanon promulgated its Bank Secrecy Law. The motive was both economical -attracting foreign deposits- and political -foreign deposits would support political stability. The Bank Secrecy Law would bind all managers and employees of the financial institution "to absolute secrecy in favor of the bank’s clients and [they] may not disclose to anyone, whether a private individual or an administrative, military or judicial authority, the names of clients, their assets and facts concerning them" (see ABL article). What this meant was that high net-worth individuals and/or entities could benefit from bank-client confidentiality. The privileged handpicked clients could have numbered accounts and/or an underground bank vault access. Most employees of the bank would not know who were the real people behind the screen name and/or number. It is the duty of all banks operating in Lebanon, Lebanese or branches of foreign banks, to keep information related to the name, the funds and or transactions of the said clients confidential. Any infringement to the secrecy is punishable under the Criminal Code by 3 months to one year imprisonment and the charged can never be a banker nor be employed by a bank anymore. Exceptions to the secrecy would occur if the deceased owner of the account had left a written permission to his/her heirs, if the account holder was declared bankrupt and if judicial authorities would be acting against illegal enrichment.

How do the more recent developments fighting off bank secrecy world-wide affect Lebanon?

This tiny country on the shores of the Mediterranean is currently at position 11 on the Financial Secrecy Index of 2018. To note, Lebanon has a The Global Scale Weight (GSW) of 0.51%. The GSW "represents a jurisdiction's share in global financial services exports" (see Financial Secrecy Index). Lebanon is hence very close to Taiwan, placed at position 8 on the index and with a GSW of 0.50% and way ahead of the UAE placed at position 9 on the index and with a GSW of 0.14%. What all this gibberish means is that Lebanon, although a very small financial platform, has always and still caters to a lot of wealthy Arabs, even before the petrodollars era, especially after the recent run down on bank secrecy in the past decade. And that this small country that has a diaspora comprising several high net-worth individuals such as Carlos Slim, Nicholas Hayek, or Shakira just to name a few, proved certainly very strong facing the financial and political turmoils, internally and internationally. It is important to signal here that first on the Financial Secrecy Index of 2018 is, obviously, Switzerland, followed closely by the USA...

After a long civil war, Lebanon was recovering and its banking sector that resiliently sustained the hardships of war was looking forward to attracting more funds and investments. In the hype of reconstruction, banks were proving once more that they formed a solid part of the backbone of the economy. And in 2001, wishing to abide by international regulations fighting money laundering and to remove the tax haven's stigma since Lebanon had been nominated on the Non Cooperative Countries or Territories (NCCT) list in the year 2000, Law 318 was promulgated. It would be replaced in 2015 to allow the Special Investigation Commission (SIC) to lift bank secrecy and to freeze accounts deemed to have either laundered money or financed terrorism. The SIC operates under the umbrella of the Central Bank of Lebanon and is independent in its scrutiny and reporting. It has provided Lebanon with the possibility to belong to international networks fighting money laundering and terrorist financing such as the Egmont group and to count on the assistance of other bodies investigating the same or similar cases. 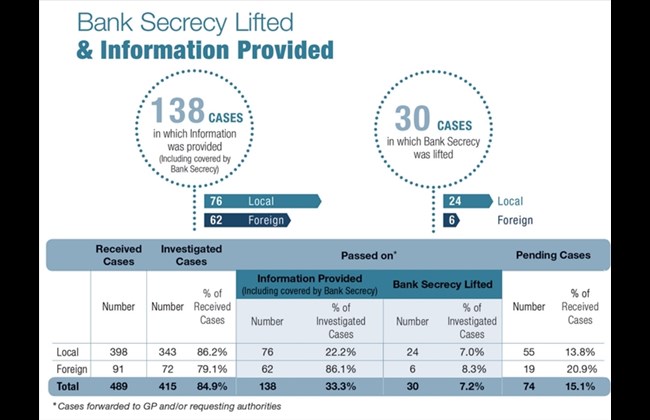 Since its creation, the SIC has been investigating more and more cases and looking into more transactions and account activities, following the money trail sometimes across several continents to get to the bottom of the story. Recently and based on its findings, the SIC not only lifted the bank secrecy off but also froze several accounts. The General Prosecutor is then informed by the SIC to take appropriate measures and to inform the foreign judicial authority about the findings. This is possible through the assistance with foreign bodies as well as the Internal Security Forces (ISF) of Lebanon, as more cyber crimes are being explored. More on this, here. Currently, Lebanon is not what is called transparent on its numbers. Be it official statistics or company information. And usually, a lot of data is kept from the public eye. For instance, the national census of... 1943 has not been officially updated yet. Yes yes, you are reading correctly, it has been that long... Most companies do not publish their yearly financials and most manipulate their "official numbers". Banks on the other hand are required to publish their end of year financial statements within a timeframe. This context is thus opportune for illegal activities like tax evasion for instance. Especially that Lebanon only made some concessions regarding terrorist financing to preserve its goodwill with the USA and yet still provides non resident entities with tax exemptions for instance. It will probably be very complex to reform the Lebanese banking sector into becoming fully transparent. And is Lebanon aiming at it at all?...

Link to the private banking cartoon.

Link to the bank secrecy overview.